The Pros and Cons of Blockchain | The TLC Group
18017
post-template-default,single,single-post,postid-18017,single-format-standard,ajax_fade,page_not_loaded,,side_menu_slide_from_right,qode-content-sidebar-responsive,qode-theme-ver-14.3,qode-theme-bridge,disabled_footer_bottom,bridge,wpb-js-composer js-comp-ver-5.4.7,vc_responsive

The Pros and Cons of Blockchain

Home > News  > The Pros and Cons of Blockchain 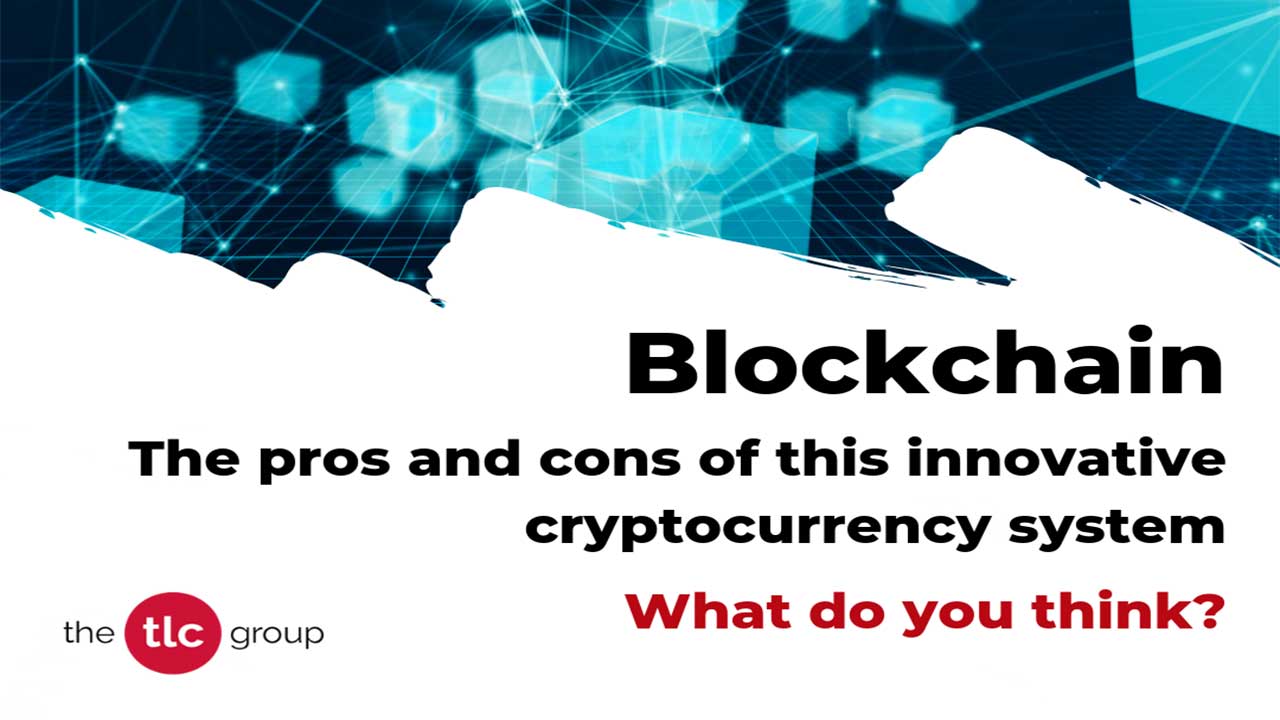 The Pros and Cons of Blockchain

Blockchain is a rapidly growing system that stores data. It is the record keeping technology behind Bitcoin. Digital information is the block and the chain is the public database. Blocks contain information like times, dates and details of purchases. Once it’s added to the chain it is public for anyone to view. This data can also be currency, property exchanges, supply chains or votes for candidates. Over 1/3 of companies are now using Blockchain. But as it gains popularity are we getting swept away in the possibilities while overlooking the risks?

Bitcoin is not controlled by a central authority. Is this decentralisation safe? Printed money is regulated and controlled. A positive is that Bitcoin never stops. A bank will be open Monday to Friday 9am – 5pm. So if a cheque is deposited Friday 5:30pm then it will take 3-5 for the money to be deposited. Whereas Bitcoin is instantly working all the time.

There are many pros to using this transparent technology. It is more secure than real money as it will not be impacted by inflation. There is no need for a central authority too. The cost for third party verification is also non-existent. Transaction fees are lower which can save companies millions each year if they changed to Blockchain and Bitcoin. There is no risk of human error which improves accuracy. Verification is done by millions of computers. It is harder for hackers to change the information due to the volume of computers doing checks. The data in Blockchain has been stored in a chronological way, meaning that it is easier to trace alterations. If someone tries to hack an individual block it will change the unique hash too. Each user is given a signature without any personal details.

The millions of computers that check the blocks will go through “consensus models” that prove their problem solving skills. When Blockchain began these computers were in the dozens, there are now millions. Even with all these impossibilities of hacking, if someone was able to control 51% of these computers then there is a possibility that it can be overrun. The benefits of hacking Blockchain would be outweighed by the negative costs and effort to do it. This is because Blockchain works by creating a linear chain that is replicated on every computer in the network. These are all identical so if a hacker was to manipulate one blockchain they would need to do every other one which is near impossible.

The cons of Blockchain is that there are lower transactions per second. Due to its privacy for the users its history is also that of illicit activities. The market is never stable in cryptocurrency which means it is a high risk to use it. Blockchain and Bitcoin is not widely accepted as it is not commercial. However companies like Lush use Bitcoin as an alternative payment on their websites. When Blockchain is mined there is a cost to the technologies that are mining it. It can run in the background and it is legal.

Like all emerging technologies there are positives and negatives. Blockchain is a developing system which seems to only grow stronger. However will it take one bad day to bring it all down? What do you think?